The mother-of-six who invented the disposable nappy has died at her home near Inverness aged 94.

She created the first "Paddi" after having her third child, Nigel, in 1947 and becoming fed-up with washing traditional nappies.

The two-part garments were initially made out of old nylon parachutes, tissue wadding and cotton wool.

Mrs Hunter Gordon made hundreds of the nappies using a sewing machine at her kitchen table, supplying friends with the product and constantly modifying the design.

Her husband, Major Pat Hunter Gordon, was also pressed into helping make the nappies when he returned from fighting in Borneo.

Speaking to the BBC in 2015, Mrs Hunter Gordon said she had found washing nappies much too laborious and so began searching for disposables.

"I thought you must be able to buy them - but you couldn't, not anywhere," she said.

"It seemed extraordinary that it hadn't been done before. I thought, it's easy, I'll make them. But it wasn't easy. It was quite tricky.

"Everybody who saw them said, Valerie, please would you make one for me? And so I ended up by making about over 600 of them.

"I spent my time sitting at my mother's sewing machine, making these wretched things."

Paddis replaced absorbent cotton towelling nappies, which had to be washed after each use.

"Everybody wanted to stop washing nappies. Nowadays they seem to want to wash them again - good luck to them," Mrs Hunter Gordon said last year. 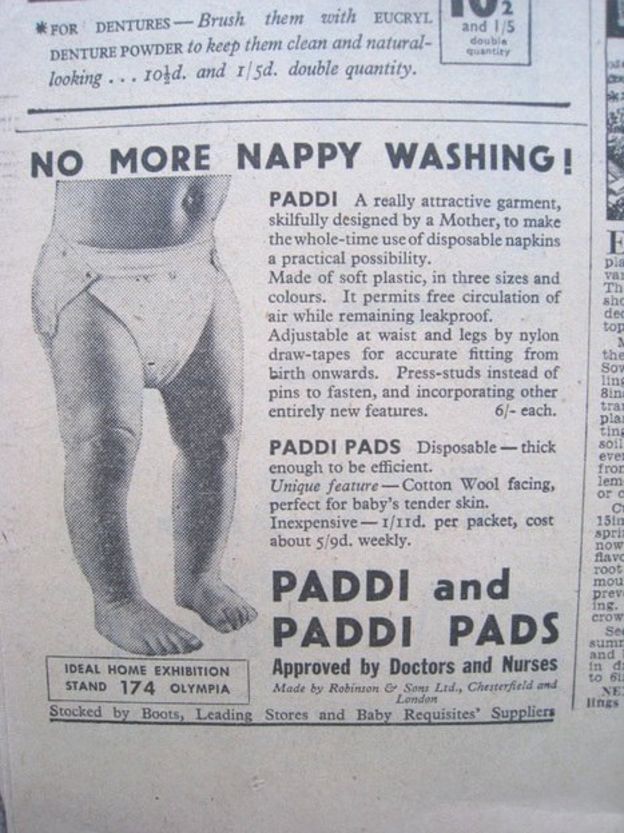 Last modified on Saturday, 22 October 2016 11:08
Tweet
More in this category: « Chai wala becomes model after overnight fame The cafe that charges 6p a minute »
back to top