Ibtihaj Muhammad has used her profile as an Olympian to try to change misconceptions others might have about Muslim-Americans.

Muhammad, a New Jersey native, started fencing in part because the uniform allowed her to adhere to the tenets of her faith.

She has moved from 12th to eighth in the world standings in 2016 and won gold at the Pan American Championships in Panama in June. Muhammad also won bronze medals in recent World Cups in Greece and France.

Initially making headlines when she qualified for the Olympics this year, Muhammad subsequently became one of the biggest faces of the U.S. team, appearing on talk shows all over the country while garnering attention not often showered on fencers.

Such has been her impact that Time magazine included her in their 2016 list for 100 most influential people, while credit card company Visa have put her at the forefront of their advertising. 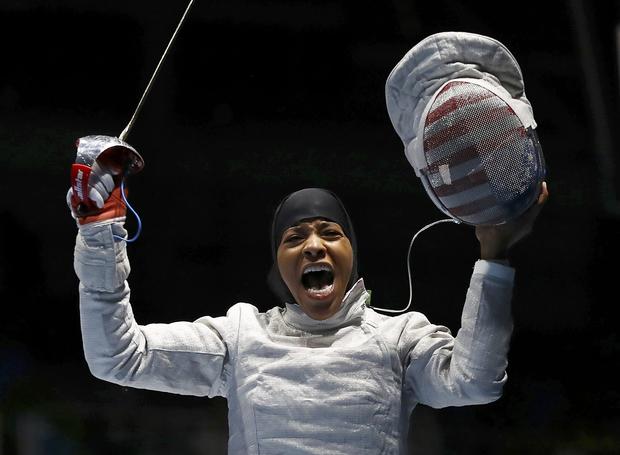 "In this particular political climate in the history of this country, it is groundbreaking to have a Muslim woman on the US team," Muhammad tells BBC Sport.

"I am excited to challenge the stereotypes and misconceptions people have about Muslim women. I want to show people that we can not only be on any Olympic team, but on the US Olympic team which is the strongest of the world's teams.".

"If I can be a source of inspiration to not just Muslim youth, but to other kids who have been told they don't belong because they were different... if I can encourage women to be active, then that is a positive thing."

However, she was met with constant prejudices. At a fencing event in Texas, she was asked to remove her hijab, while in April a man in the street asked if she was going to blow something up as she looked suspicious.

However, her popularity is such that she was invited to a function at the White House for the festival of Eid, which marks the end of the fasting month of Ramadan. President Barack Obama jested there was "no pressure" on her shoulders in competing at the Olympics with a hijab.

Muhammad also gave Obama's wife Michelle a fencing lesson in New York, when marking 100 days to the start of the Olympics.

Last modified on Wednesday, 10 August 2016 12:54
Tweet
More in this category: « Review : Brecht within a Tamil Chalk Circle The bridesmaid who comes at a price »
back to top