Parents of two Tamil university students killed by police gunfire are under intense pressure to stop seeking justice for the victims.

Police officers who visited parents of the slain art faculty undergraduates in their homes in northern Sri Lanka have demanded that they 'give up taking the issue further and come to a settlement' as the suspects have already been arrested.

Immediately following the killing of Wijayakumar Sulakshan (24) and Nadarasa Gajan on Thursday (20) police announced that the two died after they met with an accident at the Kulappitty junction in Kokuvil, Jaffna while riding a motorcycle under the 'influence of alcohol.'

No medical evidence was made available to verify the claim.

An inquest held at the Jaffna teaching hospital by Judicial Medical Officer (JMO) U Mayuran established that Sulakshan was killed by shooting. The skull of Gajan was found to be severely damaged.

A group of police officers visiting Sulakshan's father Sinnathurai Wijayakumar in Jaffna and Gajan's mother Nadarasa Sarojini in Kilinochchi on Sunday (23) have offered money and jobs for any unemployed in the family in exchange for dropping the case.

"No one will benefit from dragging the case further," the police officers have told the grieving parents. 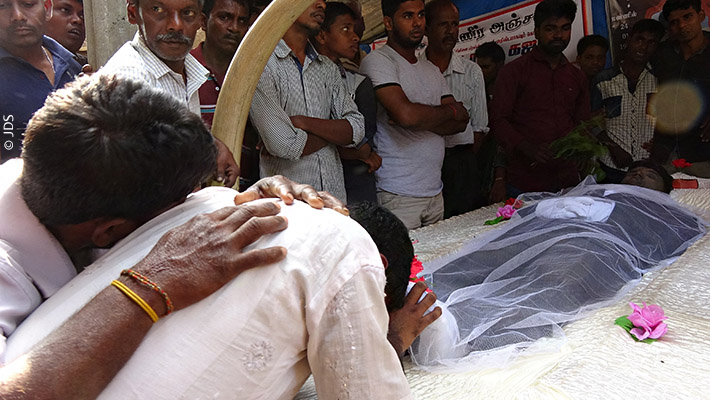 Sinnathurai Wijayakumar is in deep shock as he lost his second while still searching for his elder son who has disappeared.

The father told JDS that he informed the police officers what he only needs is justice for his sons who are no more with him.

"What can I do with money when the police shot my son to death like an animal?" he questioned.

Gajan's mother also told JDS that she is seeking justice for her slain son, instead of cash or other benefit.

"My son raised funds for his university education by doing manual labour. When such a child is killed I don't want any other return except justice," she said.

Five policemen including Sub Inspector Sarath Dissanayake who were arrested by the Criminal Investigation Department (CID) were remanded until 4 November by Jaffna Magistrate S Satheeswaran on Saturday.

The funeral of Gajan held in Kilinochchi on Sunday was attended by a large number of the public while the Jaffna University Students Union has declared Monday as a day of mourning when the funeral of Sulakshan is due to take place. 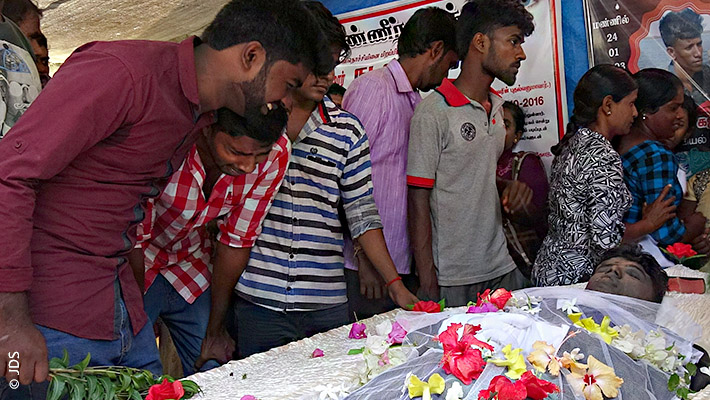