On a small wooden table at the doorway to this bright-turquoise house in Kilinochchi, the town that Tamil militants claimed as their capital during Sri Lanka’s bloody civil war, stands a framed photograph of a 12-year-old girl wearing a pink tunic.

Next to it, in a smaller frame, is a photograph of her uncle and aunt and their two children.

All of the people in the pictures, members of the extended Ramasamy family, were killed in 2009, about 35 miles from here during the war’s chaotic end, after seeking refuge in a bunker in what was supposed to be a no-fire zone.

As we talked to residents in and around Kilinochchi, it became clear to us that the Ramasamys’ loss was by no means an exception. The war, between two ethnic groups in Sri Lanka, the Sinhalese-dominated government and the Liberation Tigers of Tamil Eelam, claimed tens of thousands of lives over 26 years of fighting. Virtually everyone here had a story to tell us of someone close — a father or brother, a sister or child — who had been killed or wounded, or who had simply vanished.

Most of the people who died were cut down when the government forces defeated the militants in a drawn-out assault, after the retreating Tamil fighters forced civilians into a no-fire zone and then sought protection by mingling among them. The United Nations estimates that around 40,000 people, most of them civilians, were killed in the battles that ended the war.

“We buried five family members in one grave as we fled,” said Saraswathi Ramasamy, the mother of Mohanaruby, the 12-year-old in the pink tunic, who was killed in the battle. Darkness settled on a sweltering summer evening this month as Ms. Ramasamy sat on the porch of the turquoise house, a few feet from the table holding the pictures of the loved ones she lost.

Survivors have slowly returned to the Kilinochchi area, after months or even years in government rehabilitation camps, to undertake the wearying task of rebuilding their lives.

After the war, the surviving Ramasamys were moved around, first into government camps and then, a year later, back to their land, where they discovered that their house had been destroyed.

“I went back to the plot where we buried the five. Small trees were growing on top. And I just let it be,” Ms. Ramasamy said, lowering her gaze to the floor and falling silent. 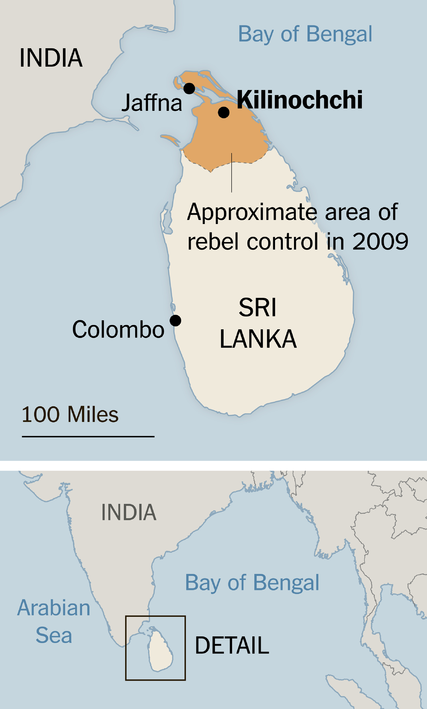 She said the family member she and her husband tried hardest to protect throughout the war was their elder daughter, Mohanatharsini, the lanky, cheerful 23-year-old who showed us around the house, talking nonstop and dressed in a parrot-green shirt and dark skirt, her uniform at the clothing manufacturer where she works.

Her mother recalled that during the war, the militants showed up every few months to search the Ramasamys’ house as part of a continuous effort to recruit new people. Mohanatharsini was a teenager then, the ideal age for recruitment.

To prevent her from being conscripted, the family tried to flee Kilinochchi, Ms. Ramasamy said, but the militants stopped them at the border and sent them back.

Desperate, they dug a hole on their property, filled it with water and covered it with a plastic tarp and branches to create a makeshift hiding place for their daughter, Ms. Ramasamy said. When the family got word the militants were nearby, Mohanatharsini would descend into the watery hole and hide there for hours until they left. 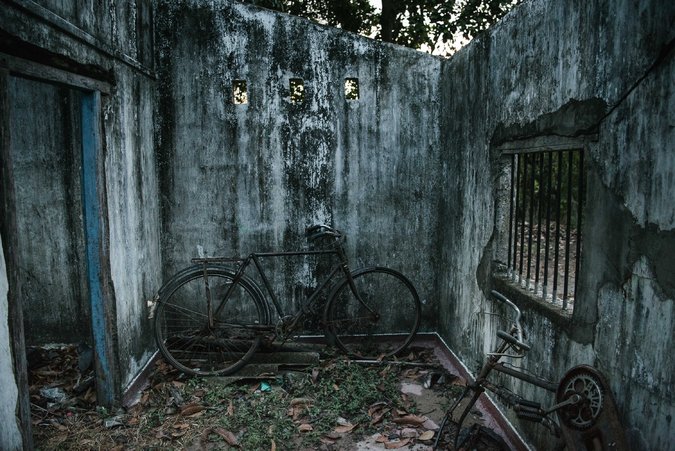 Despite the family’s losses and deprivations, if it is possible to speak of lucky ones here, the Ramasamys might qualify. When they first returned, they lived under a roof made of coconut leaves, but now they have a new house and a comfortable life. In 2012, two years after they returned, Mohanatharsini secured a job at one of the first companies to move into Kilinochchi after the war, MAS Holdings, the largest clothing manufacturer in the country.

Starting in an entry-level job on the production floor, she earned $80 a month making activewear for Nike. In this area, where virtually the only employment at the time was in the rice paddies, her salary was a small fortune.

And it grew as she was promoted. Now she earns $150 per month as a data entry operator for inventory management, working on a laptop in an office off the factory floor.

“Because of this job opportunity, I earned money, and I had the ability to pay for a house,” she said as she stood with us outside her office, looking over the factory floor where more than 1,500 people worked, all dressed like her in green knit shirts, some inspecting shorts and attaching tiny stickers to them. Down the road, about 600 women at a second MAS factory were stitching underwear for Victoria’s Secret, for whom the factory produces one million pieces each month. 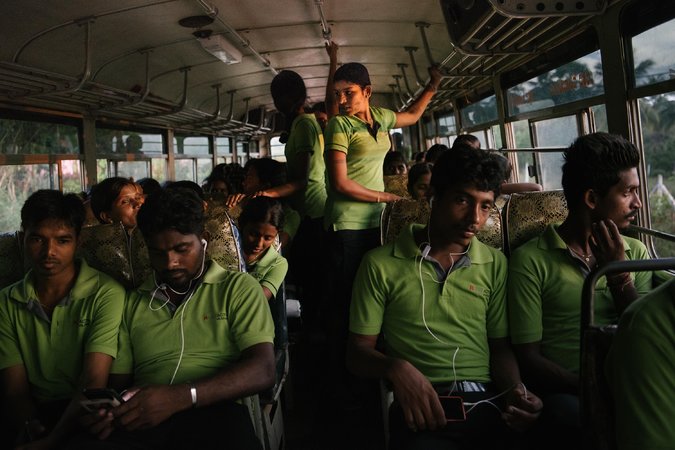 A government subsidy of 350,000 Sri Lankan rupees, or about $2,500, helped get construction started on the Ramasamy family’s turquoise house, and Mohanatharsini Ramasamy’s salary helped finish the ranch-style home with a tin roof. The total cost: about 700,000 rupees, or $5,000.

Parked out front, between the house and the family’s paddy field, was a shiny red tractor that she helped her younger brother lease so he could start a business plowing fields for local farmers.

She said she was also able to cover the school expenses of her cousin, 15-year-old Tamilchelvi, who lives in the turquoise house, too. She is the only surviving member of Mohanatharsini’s uncle’s family; the rest died in the bunker. Their faces look out of the picture frame at the entrance to the house.

Dressed in a red tank top and skirt, her hair pulled back into a ponytail, Tamilchelvi stood in the doorway, smiling shyly. “She’s studying for her O levels, and hopes to do well enough to get a good job, like me,” Mohanatharsini told us, referring to the exam students take in the 10th grade.

On a shelf in the prayer room inside the house sits a picture of Amman, who the family worships as a wife of Lord Krishna, the god of mischief and dancing, and whose portrait slipped out of a frame when the old home was bombed. The family’s long journey since then has led it to expand the altar to include Murugan, the Hindu god of war, and Ganpati, the god who overcomes all obstacles.

Ash from burning incense formed a thick layer over the gods’ pictures in a room that doubles as the storehouse for another of the family’s most valued possessions: rice. A dozen bags from the family’s fields — food for the coming year — were piled high.

Last modified on Thursday, 19 May 2016 10:13
Tweet
More in this category: « My dear Mahinda: An open letter from Mangala Samaraweera to ex-President How cricket has helped heal Sri Lanka's south »
back to top